England Begin Their Series With A Seven Wicket 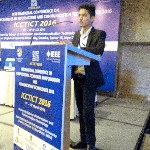 James Vince produced a beauty of an innings to snatch the first T20 international away from New Zealand in a seven-wicket win.

Vince's career best 59 was as stylishly crafted as you would expect from such an elegant player and it certainly suited the picturesque Hagley Oval as it bathed in sunshine.

His only blemish was the way he pulled arguably the worst ball delivered by Mitchell Santner into the hands of Martin Guptill in the deep.

But by then England were well on their way to victory with skipper Eoin Morgan set and hunting down the target of 154 for the win. It came when Morgan hit the final maximum of the game to finish 34 not out and close things out with nine balls to spare, as comfortable as it gets.

Left arm spinner Santner claimed all three wickets to fall but it was only Dawid Malan who found life difficult in the middle in making 11.

Jonny Bairstow had looked in rude health clubbing 35 from 28 balls before he holed out in the deep, and he could yet find himself getting an unexpected extended run on tour if he is required to replace Joe Denly in the Test squad following his ankle injury.